It's a geek thing but I like knowing that I'm in control of my digital paraphernalia which usually sees me going about things in a slightly more complex manner to achieve the result I want. While iPhoto works well with importing pictures from my iPhone, and has generally served me well, I've read enough horror stories about corrupt iPhoto databases that finally pushed me to look into alternative workflows. What more control could I ask for than storing my images within the filesystem and being sync'd with Dropbox?

Federico did just that in his post but I've expanded upon the Hazel rules in his post and have ended up with a set of rules that I think work quite well. Images or videos come into Dropbox\Camera Uploads (be they individual files or files within subfolders) where they're sent off to the root of Dropbox\Photos to be swiftly placed into a folder structure of YYYY\MM - Month\ (i.e 2014\01 - January). The year folders are created as needed so there's nothing left to do after setting up these rules.

This folder is used as the main input as Dropbox will upload to here when importing on iOS or Mac. This rule will allow us to deal with images that are stored in subfolders as without it you'll need to ensure that all image files are in the root of this folder.

This rule will move any images or movies from the Camera Uploads folder to the root of Photos where the next rule will take over.

Our last rule does the work of moving our media into folders based on the created date.

We "Sort into subfolder" based on YYYY from the created date 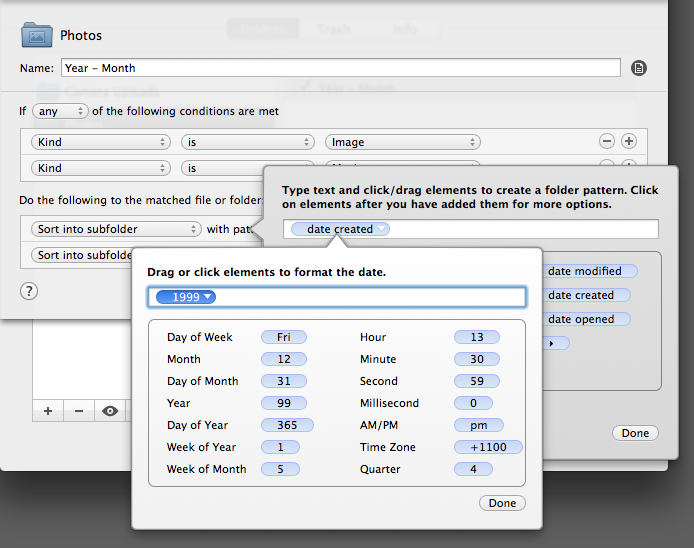 and then into a subfolder under YYY called MM - Month