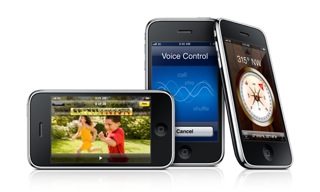 Announced on 08 June 2009 at the Apple WWDC (World Wide Developers Conference) the iPhone 3G S (S for Speed) comes in two models of either white or black and 16/32GG and will retail in the US for $199/$299 with a new service contract from AT&T.

Externally the device is the same as the previous iPhone 3G but all the good enhancements are under the hood.