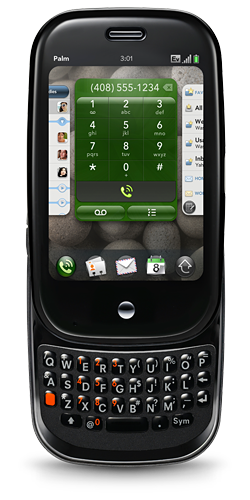 Palm Pre must be, at long last, one of the most interesting things to emerge from Palm in an extremely long time. Featuring the new Palm webOS this internet-connected smartphone sits perfectly next to the Android G1 and Apple iPhone and definitely gives each of them a run for their money.

Scheduled for release in the USA during H1 2009 and initially only available on the Sprint network using CDMAEV-DO Revision A it will sport:

Developers will be pleased to note that, unlike the iPhone, by developing in HTML, CSS and JavaScript you'll have full access to most of the phone features. In fact everything you need to do will be available as during the Palm keynote at CES they said that the applications that they developed were actually developed in the same system that developers will have access to.

It's wonderful to know that Palm have looked around at the competition (and no, that's not Windows Mobile since they're so far off it's not even funny) and incorporated some of the best aspects from each. So what is it that makes this platform different from other competitors on the market?

Perhaps it's a necessary evil but we're always ending up doing more than one thing at a time as is usually demanded by our hectic lives. One moment you're working on an email and then have need to quickly reply to an SMS or IM that's just come in. If you're on the iPhone you're forced to quit your current application to move over to the next which definitely impedes productivity. And when working on a mobile phone it's naive of the applications to expect that you will start and finish your task in one go.

The Palm Pre encourages one to think of applications as a deck of cards that can easily be shuffled in and out of view by using the gesture system. In fact this is very similar to the way that Safari works on the iPhone and one has to wonder why Apple has perhaps not implemented something like this since it seems an extremely logical progression. Web pages are almost the same as applications (and Apple even encourages developers to think this way) so why have the distinction (other than due to local system resources but then you have the 'screenshot' of the application as it was at it's last use so you could just extend that)?

The iPhone allows for 9 screens of applications which accounts for 144 (16 x 9), including the standard, applications. And remember that none of the applications are sorted by name other that the sorting that you decide to apply when moving icons around. How do you even go about figuring where to launch something from?

Palm seems to have solved this with it's Universal Search whereby you begin typing and the OS narrows down contacts and applications allowing you to sensibly navigate relevant options. Beats the heck out of scrolling 9 pages and trying to spot the icon for the application you're looking for.

As I mentioned earlier we are a slave to multi-tasking and we're used to being inundated with notifications, be they emails pouring in or friends and co-workers asking you questions via IM. Growl on OS X has provided us with an unobtrusive system for getting notifications pushed to us and allowing one to decided whether it's important enough to act on. Android has it's notification bar and the iPhone would appear to not have any system for unobtrusive notifications (not unless you count badge changes while at the home screen and the push API has not even been released) yet the Pre will allow one to easily act on or ignore notifications as you see fit.

Work and home sadly too often blend into one and it can easily become quite difficult to separate the two. We're feeling obliged to be on top of work issues and, more often than not, are not always provided with a blackberry or other smartphone. So what do we do? We'll we turn to setting up our personal devices to connect to the corporate network.

And yes while there are times when you care about what's going on in the office it would be nice to still somehow be able to separate contacts, calendars and tasks. Just because we decided to sync does not mean we want our device to become owned and overrun by the company we work for. Someone at Palm saw this and has allowed users to easily toggle what they see. If you're in the office frame of mind you can easily apply a filter to applications, such as calendar, to display work items and at other times show only personal contacts and calendars. That helps to have the best of both worlds while still being in contact with either party.

Just because we have 24/7 internal and email access does not mean we want to be inundated with office notifications and it's refreshing to see this be taken to heart.

Computer systems often make us distinguish between the different methods that we use to contact a person, and while that's great for it, we see communication with an individual no different based on the system, be it email, sms or IM. Why should the medium cause me to think and act any differently? After all I just want to get a message across in the best medium possible and those should most definitely be interchangeable.

An awesome feature of the Palm Pre (and most likely webOS) is the ability to easily change between communication methods. You might start chatting with your significant other via IM but then switch to SMS or email when they go offline. You simply select the transport medium via a drop down menu but from your point of view it's all still the same communication.

According the the developer site webOS " integrates the power of a window-based operating system with the simplicity of a browser" and utilising Mojo you'll be able to:

Delivery of applications will be via the Palm App Catalogue which will be similar to the Apple App Store allowing users to browse and purchase applications directly from their Pre handset. No word yet on eligibility, revenue or acceptance requirements.

Even more interesting is that the default applications that come installed have been developed internally by Palm using the same SDK that will be made available to developers. How's that for eating your own dog food? But there will have to be restrictions to protect both users and the mobile network and there will need to be a permissions based system whereby the user is prompted what the application will use and won't continue without their consent. It's definitely hopeful that the SDK will provide access to features such as SMS text messaging. Only time will tell what balance Palm strikes here.